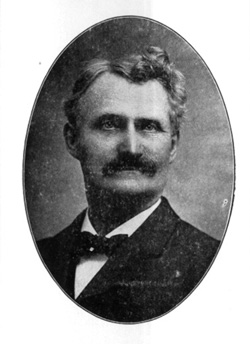 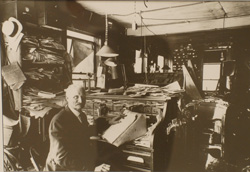 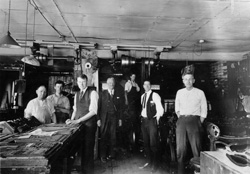 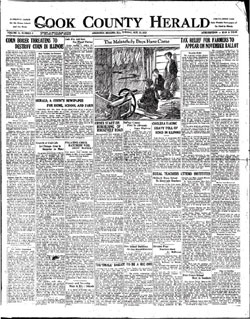 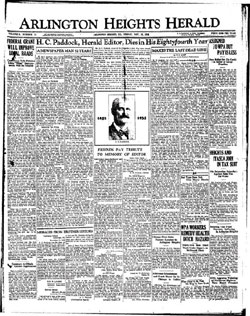 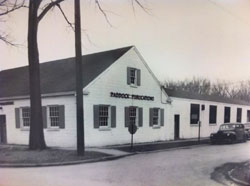 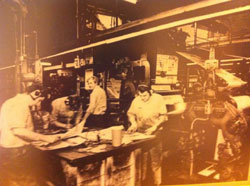 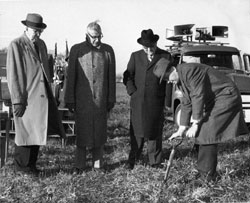 1957
From left: Stuart Paddock Sr., Nicholas Lattof, John Bartizal and Charles Walters, chairman of the board, attend the groundbreaking for Northwest Community Hospital. 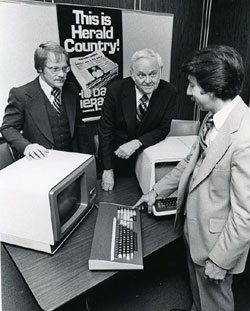 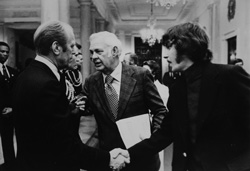 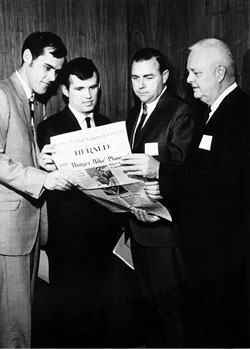 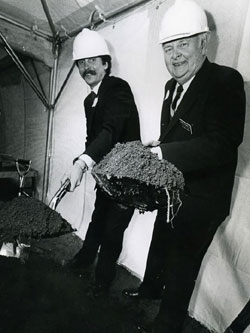 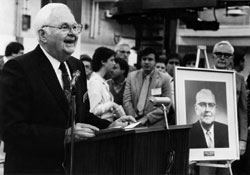 Since being established in 1872 as the Cook County Herald, we have been leading the way in publishing, print production, and media solution. We are proud of our long history of commitment to the Chicago suburbs, and invite you to explore our history of innovation and growth in the media and publishing industries.

1875 – Earlie sold Cook County Herald to John Holden and W. C. Williams: Williams sold his half to Holden, started the “Advertiser” and bought the Palatine Herald from Holden

1899 – H.C. Paddock expands holdings by taking possession with detail of chattel mortgage listed in book of Palatine Justices of the Peace, the Day Journal

1922 – H.C. Paddock sells the business to his sons, Stuart and Charlie Paddock, changing the firm name to H.C. Paddock Sons

Also, initiated publication of Buffalo Grove Herald as a tri-weekly

Adopts “A Paddock Publication” as part of the nameplate

The Barrington, Lake Zurich, and Wauconda Heralds added as weeklies

1975 – Paddock Publications launches Saturday edition for all the dailies

Last issue of Herald of Waukegan is published

1982 – Paddock Publications initiates Wednesday Suburbanite, publication of This Week, and initiates use of all three presses simultaneously

1986 – Formation of the Editorial Graphics department

Completes the computerization of Circulation department

Winfield is added to Wheaton Edition

Breaks ground for an addition to the Printing Center of approximately 20,000 square feet

Paddock Publications initiates use of third press at the Printing Center

Opens an office in Elgin

The Herald has its 125th birthday

Robert Paddock, Jr. is elected to Board of Directors

Daily Herald receives first place Peter Lisagor Award in general photojournalism for “Hope for the city,” a series of photos of the suburban family that moved to Chicago to evangelize in an inner city neighborhood

Board of Directors gives final approval plans for Schaumburg Printing Center, a 165,000 square-foot facility on 26 acres fronting the Elgin-O’Hare expressway

Publication of Reflejos increases to bimonthly from monthly

Ground is broken for new 160,000 square-foot Daily Herald Printing Center in Schaumburg, to be completed in early 2003

Daniel E. Baumann named Deputy Chairman of the Board

Robert Y. Paddock Jr. named Vice Chairman of the Board

Daniel E. Baumann named Chairman of the Board and Publisher

Stuart R. Paddock, Jr. dies at the age of 86 in Arlington Heights

Colin O’Donnell is named Vice President of Operations and Planning

Fast Tract Marketplace is launched, a free newsstand publication replacing Daily Herald Values, which had been mailed to non-subscribers — it includes both classified and display ads

The first dailyherald.com video is posted

The first interactive graphic is posted on dailyherald.com

The Board of Directors names Eileen Brown as Assistant Vice President

Reader commenting was implemented on dailyherald.com

Blogs are launched on dailyherald.com

The new section, Celebrate! section debuts – an online component debuts soon after that allows brides to put up their own wedding home page, photo galleries, etc.

Another new section, Your Time, debuts – a combination of the TV magazine, travel, and entertainment sections

The new Reflejos entertainment section, Mango, debuts and prints on the third Sunday of each month

Plans are announced for a Daily Herald smartphone/mobile website

2010 – Shaw Suburban Media, a division of Shaw Newspapers, and Paddock Publications announces that they have entered into a printing agreement; begins printing the Northwest Herald

Doug Ray is appointed to the position of Chairman of the Board; Dan Baumann becomes Chairman Emeritus

2018 – The Paddock Board of Directors voted to convert the company to 100% employee ownership. Under the ESOP, all shares of company stock are privately held and owned by employees.